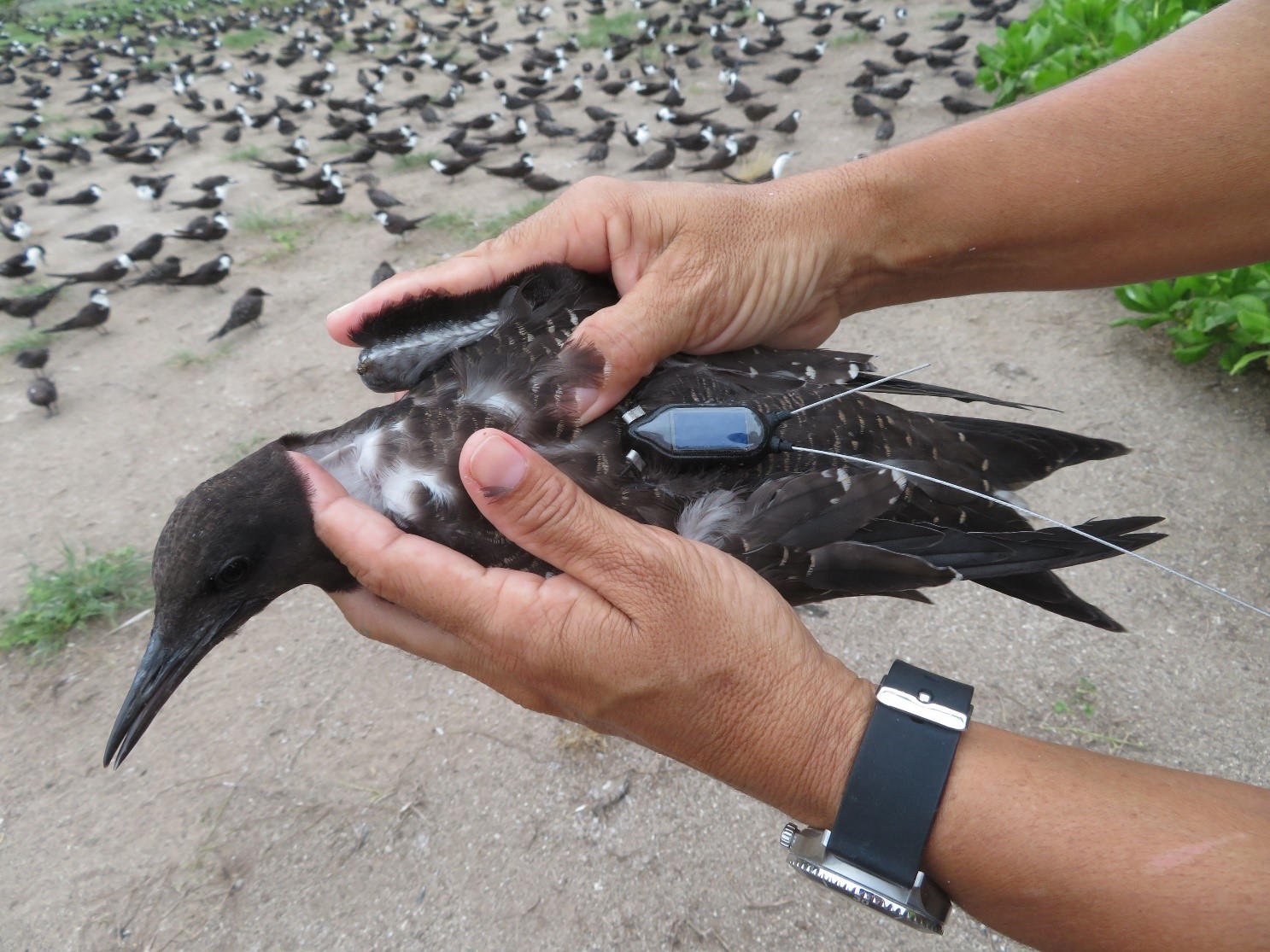 Dr Rachel Bristol and her project partners Professor Chris Feare and Christine Larose brought their innovative project to a close with a Zoom presentation to share the findings of the first satellite tracking of Sooty Terns project in Seychelles on Friday 23rd July at 10 a.m. The project has particular significance to the development of the Seychelles’ blue economy and marine spatial plan as it identified the areas that juvenile Sooty Terns have been flying to, possibly linked to the areas where there is high food availability.

Dr Rachel Bristol and Professor Chris Feare, gave presentations that showed the flight patterns of 14 satellite-tagged juvenile Sooty Terns from their leaving the Bird Island breeding colony in September 2019 to when the tags stopped transmitting, up to 12 months later, to an audience comprising conservationists, government officials and international partners.

In Seychelles, Sooty Tern eggs are a renowned delicacy and “Bird Egg Season” is a highly anticipated event, but this SeyCCAT-funded project has allowed for the Sooty Tern nesting season to garner even more acclaim as a means of assisting in the selection of areas for marine protection. The study was aimed at identifying the oceanic areas to which parents took their youngsters after leaving the colony, since we expected that these would be places of predictably high food abundance. If this expectation were correct, these selected locations could be of importance to other marine predators as well, including fish and cetaceans, and thus areas worthy of consideration for marine protection. With support from the island’s owners, the tagging was undertaken in the large Bird Island Sooty Tern colony in August 2019, with data from the tags continuing to provide location data from the juveniles up to August 2020.

When asked about the role that SeyCCAT has to play in assisting the scientific community, Professor Feare stated that, “SeyCCAT grants allow scientists to study what has never been studied before and we are grateful that our SeyCCAT grant allowed us to undertake innovative research that would otherwise have been extremely difficult. The information we obtained is of international importance, not just for Seychelles, and we shall ensure our data are widely available so that everyone can benefit from our findings.”

Due to the small sample size of only 14 tagged individuals, the pilot study did not give an obvious answer as to why Sooty Terns selected their chosen destinations but provided excellent and accurate data on their dispersal after fledging. The juvenile Sooty Terns all headed north from the colony and then dispersed widely and quickly, with one individual reaching the eastern Bay of Bengal within two months of leaving the breeding colony. Following the initial move to the north of Bird Island, all of the birds eventually dispersed more widely, with individuals reaching the Arabian Sea the Mozambique Channel, the 90-east Ridge and the huge Chagos Marine Protected Area; all of these areas had been earlier shown to be of importance to Bird Island’s adult Sooty Terns out of the breeding season. The Director General for Biodiversity Conservation and Management Division in the Ministry of Environment, Marie-May Muzungaile, noted the potential of the findings to direct policy and assist in Seychelles’ decision-making regarding marine conservation.

Tracks of the 14 juvenile Sooty Terns from fledging until each tag stopped transmitting location data. Each individual is shown as a different colour.

Dr Rachel Bristol will be submitting the final report of these findings to SeyCCAT and the Ministry of Agriculture, Climate Change and Environment (MACCE) and this will also be made available to any interested party from the SeyCCAT website.

Professor Feare also took the opportunity to note that Seychelles’ marine environment is not static but is subject to both long- and short-term changes, some of which are generated or enhanced by anthropogenic activities. These changes require ongoing monitoring and research to enable us to better predict the outcomes of human activities on marine food chains and productivity, sea-surface temperatures, sea level rise, impacts of a wide variety of pollutants etc.

A major development following this project was that SeyCCAT was approached in April 2021 by Martin Wikelski, of the German Max Planck Institute of Animal Behavior, asking if it would be possible to deploy up to 300 of their Icarus satellite transmitters in Seychelles. SeyCCAT passed the request to Rachel Bristol and Chris Feare who welcomed the prospect of acquiring data from such a large sample of birds. This unexpectedly opened up a possibility that Rachel and Chris had been discussing since 2019 but which we had considered impossible due to the need for a large number of tags. This concept involved tagging both members of nesting pairs and also their chicks just before fledging, in order to see whether both adults, or whether male or female, took the youngsters to sea, and how long the youngsters remained dependent on the parent(s) after leaving the colony. With the continuing support of Bird Island, this project began in late May 2021 when Martin and his partner Uschi Müeller, joined Rachel, Chris and Christine on Bird Island to deploy Icarus satellite tags on 80 incubating adult Sooty Terns. The nests were marked with plastic labels and after the mates of the tagged adults returned to the nests, they too were caught and fitted with Icarus tags. Chris and Christine remained on the island until all of the chicks of the marked pairs had hatched and were fitted with uniquely numbered leg rings. Rachel, Christine and Chris are due to return to Bird Island in late August to relocate these ringed chicks and to fit them with Icarus tags just before they fledge. We then eagerly await location data revealing more information on Sooty Terns’ use of their marine environment.

Our SeyCCAT grant has thus paved the way for much more detailed studies of Seychelles Sooty Terns than we had considered possible.

The recording of the presentation can be found on SeyCCAT’s YouTube channel.