Seagrass: Earth’s Best Defence Against Climate Change Which You Probably Haven’t Heard Of

In this article, Izzy Sasada talks to the ‘guardians’ of the carbon sinks- those who have dedicated their lives to the protection of seagrass meadows in the Seychelles; a fern which acts as a carbon sink, playing an important role in combatting climate change.

What is Seagrass and Why is it Important?

Seagrass is one of three blue carbon ecosystems, alongside mangroves and saltmarshes, and it is one of earth’s most efficient carbon sinks, with the ability to capture carbon dioxide and greenhouse gases and store them for millennia. It is found in the shallow waters of oceans across the world- from the tropical waters of the Seychelles, to the arctic circle.

With the rise of emissions worldwide, carbon sinks are one of our greatest defences against climate change- this is because when carbon dioxide is released into the atmosphere, it traps heat and warms the globe. Considering the rate at which we are losing our ‘land-based’ carbon sinks, namely the Amazon rainforest, which is depleting at an astonishingly rapid rate[1], it is vital that we protect these ocean-based weapons against climate change.  In fact, these carbon sinks can store carbon far more efficiently than green carbon sinks- around 40-50 times faster, in a process called carbon sequestration.

As well as storing carbon, seagrass has an abundance of other beneficial properties. They protect shores from erosion, extreme weather events and sea-level rise. They also help to maintain ocean water quality, as their blades have the ability to slow water flow and encourage sediment deposition, whilst the roots stabilize the particles further.

Perhaps most importantly, however, is seagrass’s role as a nursery habitat for many commercially important species, such as rabbitfish. The meadows act as a habitat and a productive foraging ground for both mature and juvenile rabbitfish. Once there, rabbitfish play an extraordinary ecological role which previously been overlooked when marine protected areas are being established, and recent research indicates this ought to be considered.[2]

As Dr Ameer Ebrahim, the Principal Fisheries scientist for the Seychelles Fishing Authority, explains, ‘rabbitfish have a huge impact on the resilience of the coral reef and are important not only in Seychelles but in the whole western Indian Ocean region.’ This is because rabbitfish have the ability to feed on macroalgae which may smother coral reefs if allowed to flourish, this algae is unpalatable, but not for certain species, like the rabbitfish that have the capability to feed on the microalgae, allowing space for coral to regrow. Ameer summarises, ‘if we protect the seagrass beds then we allow commercially important species, such as rabbitfish to flourish. This, in turn, allows healthier recruitment onto coral reefs.’ 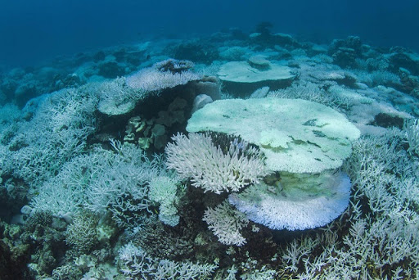 In 1998 the Seychelles suffered from a huge bleaching event and lost 90% of its coral reef. During events like these, rabbit fish are invaluable for replenishing the reef

Where Does SeyCCAT Come In?

Because of seagrass’s many properties, it is important that biodiverse island nations such as Seychelles ensure their natural wealth is protected. So what are SeyCCAT doing to facilitate the continuing role of seagrass on their land?

SeyCCAT has a number of projects which protect seagrass, such as the ‘Coastal wetlands and Climate Change’ project (CWCC) which aims to quantify the number of seagrass meadows in Seychelles and how much carbon dioxide is absorbed them, as well as the ‘Roadmap of Blue Carbon Opportunities in the Seychelles’, under a SeyCCAT BGF project, led locally by the James Michel Foundation, project managed by Dr Ameer Ebrahim. It aims to build a literary ‘roadmap’ of blue carbon in the Seychelles- a document which will set the framework to establish a Blue Carbon market in Seychelles.

A Local Plant with an International Impact:

‘Under the Paris Climate Agreement, Seychelles has to report a ‘nationally determined contribution’ regarding carbon emissions every 5 years’, she tells me. ‘It was only in 2013 that a way of measuring it was developed, so before that, we could not claim it as a nature-based solution and include it in our report.’ This is where SeyCCAT’s Coastal Wetlands project comes in. As Annike explains, ‘the project’s aim is to collect data of the carbon sequestration capacity for seagrass in the whole of Seychelles, and this data will help the country to inform it’s nationally determined contribution.’

Ameer likewise supports that the protection of seagrass has an international impact. He tells me that blue carbon credit is currently ‘a hotly debated topic’ around the world, explaining that ‘if Seychelles is able to quantify the amount of carbon stored in the country, this will have international repercussions.’ It is hoped by scientists and environmentalists such as Ameer and Annike that by quantifying blue carbon, this will give the country a new opportunity for environmental funding at a global level, whilst upholding the Seychelle’s position as an ocean pioneer, and drawing attention to the potential of seagrass worldwide.

At a local level too:

As well as having international consequences, SeyCCAT’s projects work with the local community too, raising awareness of the importance of blue carbon ecosystems. The projects hold workshops and events targeted at youth, fishermen, the hotel industry and the general public. As Ameer explains, ‘there’s an education gap between the public and the importance of meadows.’ These projects aim to bridge this gap so that the scientists can work together with the public to better protect seagrass.

Seagrass meadows have shrunk at a rate of 1 per cent every year since the start of the 20th century.[3]  Threatened by human development, further destruction of our blue carbon ecosystems will lead to a double blow, whereby we lose both carbon sequestration habitats whilst adding to our CO2 emissions at the same time. The benefits of these ecosystems are abundantly clear. Seagrass defend against climate change by holding carbon, increases biodiversity, and act as a fishery for keystone species. Yet these ecosystems are being threatened by human development. Going forward, blue carbon ecosystems such as seagrass must be afforded a level of protection at an international level and considered in top-level decision making; if we lose them, we really have lost one of our greatest weapons against climate change.