Results of the Willingness to Pay study 2019

Over the last 4 months, the Seychelles Sustainable Tourism Foundation, Valsen Consulting and the University of Seychelles have been working together to carry-out and finalize the Willingness to Pay (WTP) study, commissioned by SeyCCAT, to investigate the willingness of tourists towards adding an environmental levy to Seychelles’ existing departure fee. A survey questionnaire, based on a methodology developed by The Nature Conservancy (TNC) and applied successfully in other small island states, was developed in both English and French to establish the visitor’s willingness to pay an additional fee to invest in the natural heritage of Seychelles, as well as to compile information on the visitor’s travel experience, vacation expenditures and socioeconomic and demographic characteristics.

As part of the preparatory phase, information on the current fee system in terms of its collection mechanisms, purpose and usage, possible challenges and communication was collected in June 2019 as a basis for the methodology of the survey. A pilot survey in the first week of August was then undertaken to test the adequacy of the survey questionnaire which allowed the team to identify specific changes to be made. Trainings for both Research Assistants and Field Supervisors were delivered by Valsen Consulting and administered by SSTF in July/August to familiarize everyone with the survey instrument, survey manual and roles and responsibilities. This was a key step to ensure reliable data collection on both Mahe, Praslin and La Digue and to meet the study’s requirements.

Of the 1,101 respondents interviewed between the 15th August and 7th September, with Germany representing the highest share of interviewees (23%), followed by Italy (18%) and France (17%), 80% said they would be willing to pay an environmental fee. Of the 220 respondents (20%) that indicated that they were not willing to pay the extra fee, the main reason given was that Seychelles was already expensive and that the fee will make the destination even more so.

Among the respondents who indicated a specific dollar amount that they were willing to pay, 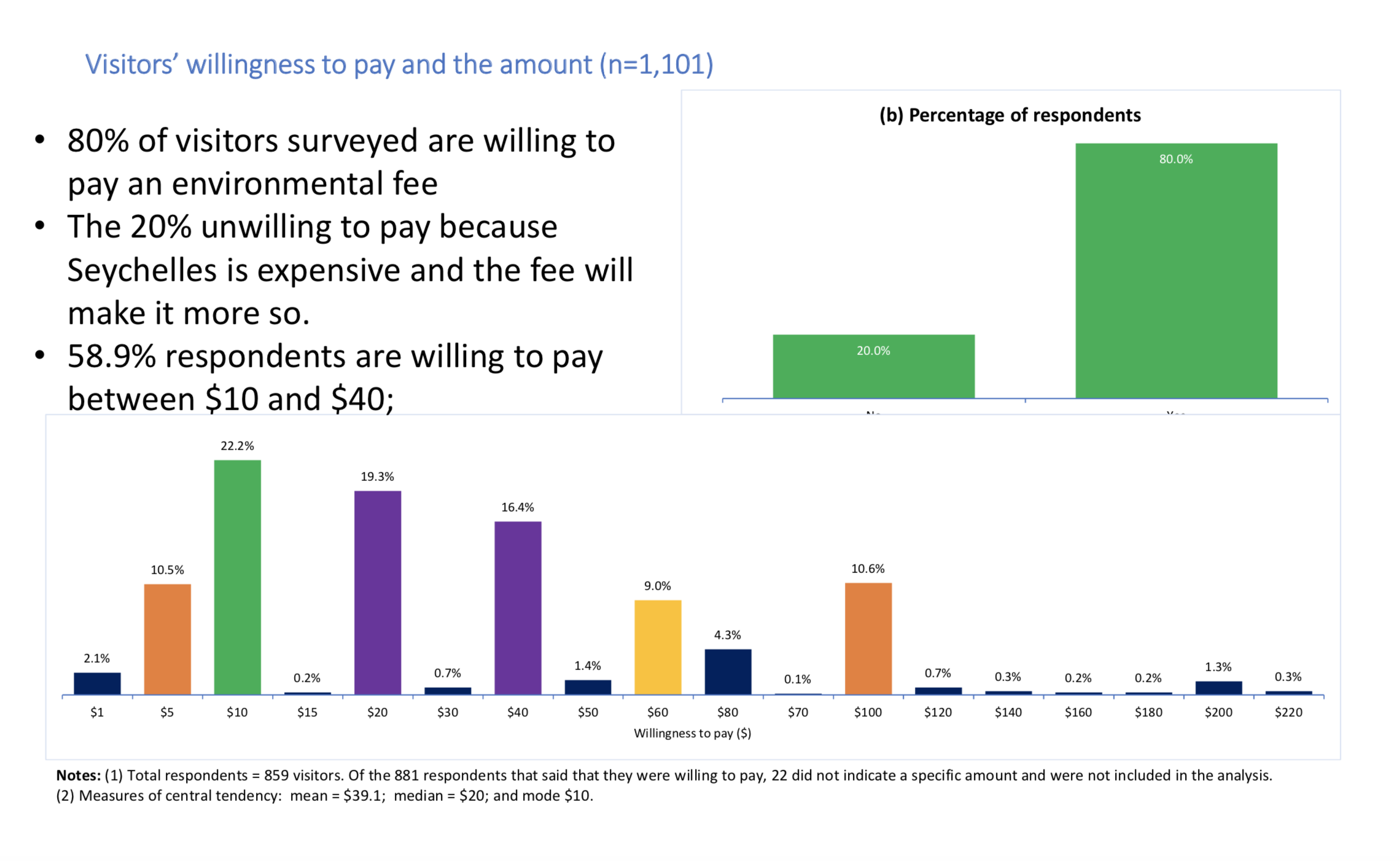 The study also explored visitor’s opinions on the management of the environmental fee. Of the 881 survey respondents who indicated a willingness to pay the extra fee, just above half said that they would prefer that the funds generated be managed by an independent trust fund.

Seychelles appears to remain highly rated amongst tourists, represented by 90% of respondents highly satisfied with their current trip and with just over three quarters of visitors rating the condition of the environment with high satisfaction level. There were however a certain number of concerns and highlighted challenges observed by the interviewed visitors. “Environmental sustainability” and “affordability of Seychelles” were the main issues raised. Under environmental sustainability, “better collection of garbage” and “recycling” were the most common concerns.