Socio-economically disadvantaged women are given employment opportunities on the WASO-SeyCCAT project, turning seaweed into home compost, and providing a solution for both the seaweed deposition around Mahé, and the shortage of suitable compost in Seychelles.

Each morning, around the east coast of Mahé, on Anse Royale and Au Cap beaches, a group of women can be found collecting the seaweed which has been washed up and deposited on the shore overnight. They are members of the Women in Action and Solidarity Organisation (WASO) and are employed on the collaborative WASO-SeyCCAT project to collect the debris off the beach. There are 8 women in total on the project, and they work in pairs during the week, before coming together on Fridays to complete to the composting procedure. Compost is an important resource, required for home gardens and agricultural projects, however, it is in short supply in Seychelles. Once prepared, the women take their produce to the market at Espace building in Victoria to sell. 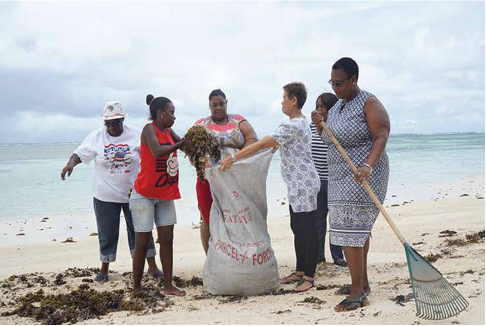 Before the project’s beginnings, the seaweed was disposed of every morning by beach cleaning crews and left unused; a huge waste, when in fact, seaweed is a largely untapped resource with many potential uses. Other countries have already twigged on to the potential of seaweed. For example, in Zanzibar, a 2018 UN Food and Agriculture report found that seaweed farming has generated up to the U.S. $8 million per year, as they harvest red seaweed in large quantities to produce carrageenan, an emulsifying agent which is found in all kinds of food, pharmaceutical and beauty products, from yoghurt to toothpaste.[1]

The seaweed collected in Mahé however, is used predominantly to make home compost, or fertilizer, of which there is a growing demand in Seychelles. Although home organic waste does the job, there just isn’t enough of it to meet the increasing demand, so the seaweed compost fills this growing in the market. The project is an example of a circular economy, whereby a natural, sustainable resource can be harvested and used to support the Seychellois community in growing their own food. 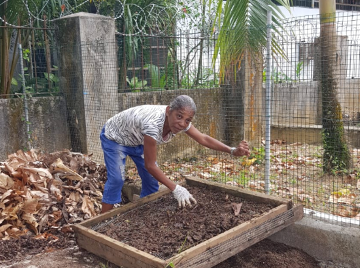 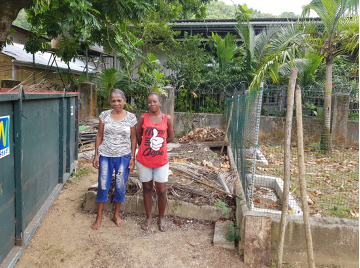 By involving mostly disadvantaged employees, the project helps alleviate the socioeconomic difficulties prevalent in Seychelles, as employees are given an opportunity to develop their entrepreneurial skills and be financially independent.

“To prepare the compost we alternate layers of seaweed and dry leaves, and then insert a long stick in the centre. The stick’s purpose is to check if the compost is ready. If we pull out the stick and the bottom is cold, then it is not ready, and we will leave it for a few more days until the stick comes out hot.” 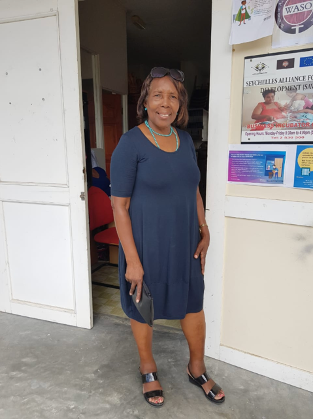 Ms Elizabeth, who initiated the project alongside Mr Benjamin Vel, explains that the project is incredibly important for building the capacity of the ladies and encouraging their entrepreneurialism. ‘By educating them about the blue economy, how to manage finances and how to build a successful business,’ she says, ‘the project will assure that they receive a good income… so that they can live a comfortable life, can support their families and have an overall higher standard of living.’

A recent study indicated that 12 per cent of the population of Seychelles is multi-dimensionally poor and are experiencing deprivation related to the standard of living, education, health and employment.[2] Ms Elizabeth explains that a project like this is ‘a first for Seychellois women in Seychelles.’

For example, Santasha, who is employed on the project, tells us that ‘the small amount I am earning now is already improving my life. I am more comfortable.’ The project allows her to save money which she puts towards raising her son. Likewise, Elizabeth, another WASO woman, also explains that the project has had a positive impact on her financial situation. Although she was already in a relatively stable position, she tells us that since partaking in the project, ‘my life is more comfortable financially, and the extra money is a big help.’ 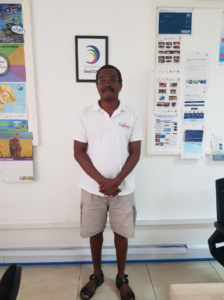 Benjamin Vel, who is the project lead and who co-created the project with Ms Elizabeth, explains that he often felt that women were not involved enough in the blue economy. He felt it was ‘time for a project to be put into place that would include our “grassroots” people, people that are often times put to the side’.

He and Ms Elizabeth wanted to create something which would both increase women’s independence and their capacity around the blue economy. According to Mr Vel, the project ‘builds the capacity of vulnerable individuals to create their own businesses, so that they can do better both socially and economically’

Furthermore, the project is mentally beneficial to the women as it allows participants a sense of purpose. For example, Elizabeth, one of the women, explains ‘I did not have much to do” before the project, especially since she was retired. She describes the project giving her a “joie de vivre”, and tells us ‘I look forward every Monday and Thursday to come to work’. Previous studies have indicated that female-led seaweed farming has led to a profound shift in gender relations in patriarchal societies.[3] Although Seychelles is already a matrifocal society, with women being the traditional head of the household, the women agree on the mental benefits which employment can bring.

Benjamin Vel explains his hope is that the ladies feel inspired to ‘form a company or corporative, expanding their project so that it becomes a large scale to reach the other islands.’

Contributed by Izzy Sasada with the assistance of Emma Mederic and Alvania Lawen.